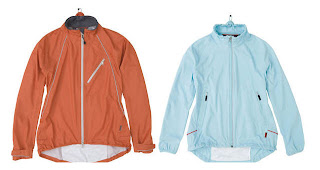 Choosing the perfect outdoor jacket isn’t easy. What looks good in the shop doesn’t always match up to expectations in the great outdoors and as jackets don’t come cheap you’ll want to make the right decision first time. Don’t be swayed by the colour, check the fit, and think carefully about how you’ll use the jacket – and I mean all the possible ways, and you stand a good chance of success.

Rohan recently sent me two jackets from its latest range, the Womens Elite Stormer and the Windrush Jacket. They’re from the company’s new Rider range – made for cyclists but not, as I found, necessarily cycling specific. The Windrush Jacket – the blue one in the image – costs £115, while the Elite Stormer costs £195.

These two jackets have quite different purposes. They both have the telltale cyclists dropped back section to help keep your behind dry, and sizeable back pockets too. The more expensive Elite Stormer is an altogether heavier duty wear than the Windrush, and the Elite Stormer could have a useful double life. 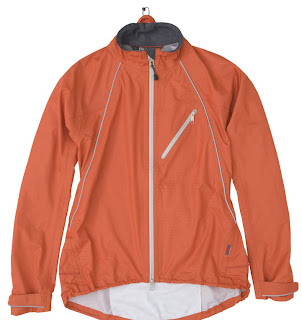 The Rohan Womens Elite Stormer is relatively light – it is weighs just 265g and it packs down fairly small. You won’t get it into a saddlepack, but if you like handlebar bags it ought to sit happily in one of those provided you haven’t crammed it already with essential snacks and repair kit!

The Stormer comes in a single colour – a really bright vivid orange with red reflective piping on the back, silver on the front – even including a silver stripe on the cuffs. Rohan calls this system ‘running lights’ and in my book the more reflective your clothing when cycling the better. 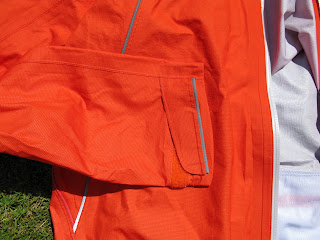 There’s no hood, but a toggle allows you to pull the neck in really tight. I’m a big fan of the soft finish to the inside of the collar – it helps prevent chafing and is the kind of detail that can help me select one jacket over another.

More technical, but just as important, is its waterproof technology. The jacket actually comprises a three layer material made up from a polyamide outer, Rohan’s Barricade membrane and a tricot lining that’s very soft. 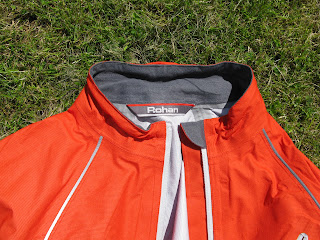 Rohan says the jacket is completely waterproof – and I did try it in some quite rainy conditions. Needless to say I suffered from droplets of water getting down the neck, but it did keep me remarkably dry in general. I didn’t find I got all that sweaty either. The breathable material lets sweat out and while I can’t claim to have sweated buckets during testing to push this to the limits, I did feel pretty comfortable inside the jacket. 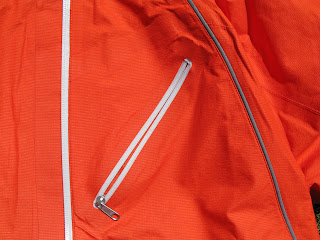 There’s a pocket on the front that you can use to store a phone if it isn’t one of the enormous modern ones. Mine has a four inch screen and it fitted, though leaving little space for anything else. The larger back pocket doubles up as the stowing sack when the jacket is in transit. 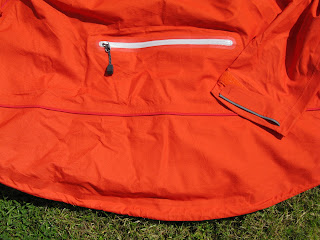 I found the fit, as I often do, a little long in the arm, but there’s plenty of manoeuvring room inside which I like and a toggle on the bottom lets you pull the jacket snugly to your body. I’d advise anyone to try this jacket on in store rather than buy online though – there are only three sizes (small, medium and large) and if you are as fussy about fit as I am you’ll want to make sure it feels just right. 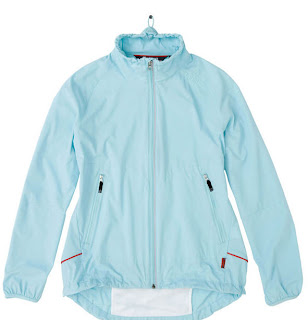 The Rohan Womens Windrush jacket is lighter and less substantial than the Elite Stormer. It weighs a mere 190g and though like the Elite Stormer it won’t fit into a saddlepack it’ll take up less space in any bag. It packs down into its own back pocket, which gives it some protection during transport and unlike the Elite Stormer the back pocket incorporates a Velcro strap so you can attach it easily to the bike if you don’t have a stowage space for it. 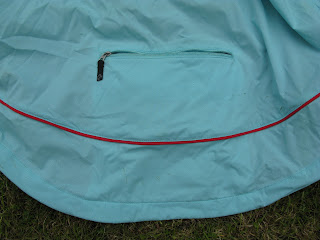 The blue colour is quite bright, and that’s just as well as the Windrush doesn’t have as much reflective piping as the Elite Stormer. There’s a strip of red on along the bottom at the back and a single strip of white down the zip on the front. The cuffs are elasticated rather than user adjustable, and they don’t have any piping. 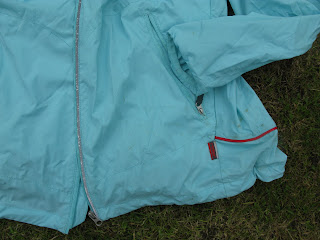 Again there’s no hood, and this time the neck doesn’t have that nice soft finish that the Elite Stormer has. You can pull the neck in tight though, using a toggle at the back.

Rather than being waterproof the Rohan Womens Windrush is classed as a windproof jacket with water repellence. I used it on a run in the drizzle and it lived up to its name nicely. I was out for three to four hours, and stayed dry throughout. 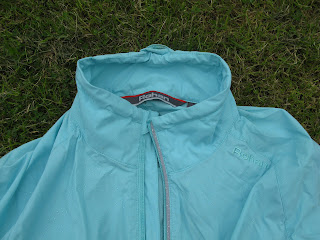 On this run I also put the cyclists back pocket to good use. I needed to carry a few things as I was marking up controls for an orienteering event I was planning. You have to carry a few bits and pieces through the forest for this task, and the back pocket was large enough for a large marker pen, some coloured sticky tape, a compass, folded printed map, biro and a few other things. It would have held a couple of snack bars had I wanted them, for example. None of the contents bobbled around and irritate me, and carrying stuff in this way was much more comfortable than the way I usually do it in a bumbag.

The Rohan Womens Windrush has two further pockets on the front, both large enough to stow things like gloves or a phone, so there’s no lack of storage in this jacket.

I found the fit of the Rohan Womens Windrush slightly better than the Elite Stormer, and again the sizing allows for plenty of movement. There’s a toggle on the hem so you can pull it tight around you.

As I said at the outset these two jackets have different purposes. I’d never dream of asking the Elite Stormer to double up as a running jacket as I did the Windrush, and I’d never wear the Windrush if I need a fully waterproof cycling jacket.

The Windrush doesn’t have quite the attention to detail in the finish as the Elite Stormer, but that Velcro on the stowage pocket could be a real godsend. And if you are a runner and a cyclist the jacket might double up for both activities for you.