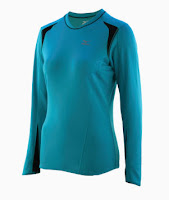 When Mizuno offered me the chance to take a look at some of its new running kit, I of course said ‘yes’ and opted for the Performance Breath Thermo Bio Leg Tight and Performance Breath Thermo Running Long Sleeve Crew Neck Shirt. I’ve been using them for about a month, on some of the coldest days of October and November, and I can see them become quite popular with me as winter running temperatures fall.

This top comes in just the one colour – a bright, rather attractive blue which I liked. There’s a light relief by way of black highlights on the arms, shoulders and around the neck and some reflective material on the front and back that makes this a good choice for running in the dark. 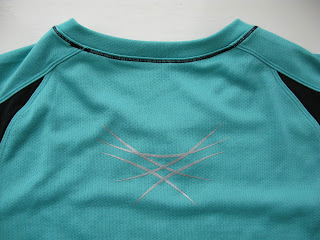 As befits winter wear this is a long sleeved running shirt. I tend not to be a fan of long sleeves because I find they can make me a bit warm. And that did indeed happen when I started using the shirt about a month ago because temperature levels at that time were rather too high for it. However, the shirt has started to come into its own as temperatures have fallen, and recent runs on cold mornings have shown it to be a good choice.

Importantly I’ve found that the shirt does a good job of keeping me warm enough without letting me overheat, and it seems to wick sweat away well, so that there’s no ‘clammy’ feel to it even after an hour’s running and quite a lot of sweating. It incorporates Mizuno’s Breath Thermo Thermal Plus technology – designed to be highly moisture absorbing and to maintain body heat. For such a light fabric it performs these functions very well. 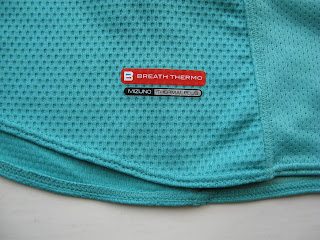 In terms of general fit there are pros and cons. I felt that the shirt was a bit long in the arm for me, but that’s not unusual.  In general clothing does tend to expect me to have longer arms than I actually do. There is a plus side, though, in that it was easy to pull my hands into the sleeves so that I could keep them warm for the first ten minutes or so of a run on very gold days, which often made wearing gloves unnecessary. 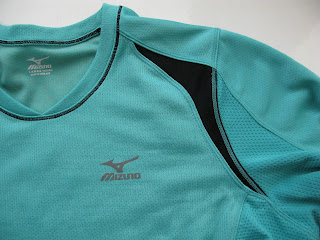 The Breath Thermo is also a little long in the fit for my liking but if you want your running top to extend down over your belly at the front and bum at the back then you’ll be happy. While it is not what I am used to it didn’t prove to be in any way problematic.

Overall the fit is quite loose – though of course this will depend on the size you go for. I found it allowed for plenty of movement and the fit under the arms is generous so that you shouldn’t feel your movement is constrained.

There is a small pocket on the back right of the shirt, on the seams. I’ve never had a running top with this feature before, and was surprised to see it. It is large enough to stow a phone, some keys or a pair of discarded gloves. There’s a flap that ensures whatever is in the pocket can’t bounce out as you run along. It just about accommodated the Sony Walkman NWZ-W260S earphones. That’s handy as I don’t really like music throughout a run, but can appreciate it during the latter parts of long runs or when I get off road. Smaller things stowed in the pocket were not noticed at all during a run, though larger and heavier objects like a mobile phone banged against my back rather annoying, and keys jangled irritatingly. 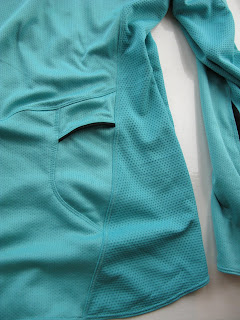 The tights are rather heavier than I am used to wearing, and I wouldn’t choose them if the outside temperature is over ten degrees. However when it was cold outside they did a good job of keeping my legs warm. Like the top they incorporate Mizuno’s Breath Thermo Thermal Plus technology. 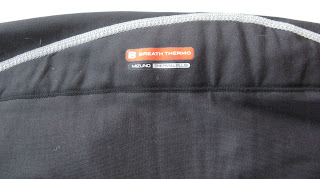 The tights are quite a tight fit, and compared to my usual much thinner tights they took a bit of getting used to. I don’t mean this in a problematic way – it is just that I was much more aware of them for the first few runs than I am of my usual tights. You might want to think about going up a size too, and should probably try these tights on in a shop before you buy.

One thing I did notice that irritated at first was that the tights were a little constrained around the knee, though again after a couple of wears I didn’t notice this at all. I think this was just a matter of getting used to the slightly thicker material they are made from. 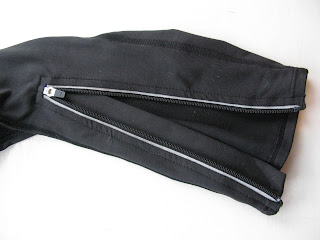 There are zippers on both ankles, as is the norm with this kind of tight, and these have reflective strips along them. There’s also a reflective band that stretches from mid thigh to mid calf, and the Mizuno logo on the front is also reflective. This makes the tights good for wearing when running at night. 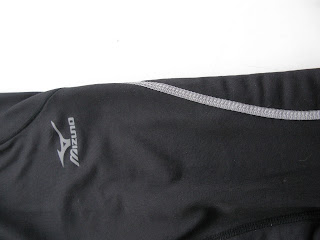 There’s a zipped pocket on the back. These back pockets are often used to carry things like phone, portable music players or keys, but this one, sadly, was close to useless for me. It wasn’t big enough for my phone – and it’s not an oversized monster, just a smartphone with a 3.7 inch screen. It won’t accommodate an iPhone. Keys of course jangled when placed in the pocket. 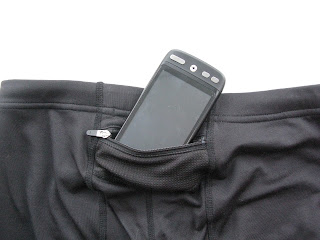 There’s also a tiny pocket on the inside of the waistband which could be useful for stowing something very small – an iPod nano for example. Once years ago I used to carry loose change in a pocket like this so I could stop my main run at a shop a few minutes from home and buy bread and a newspaper. It’s great for this kind of thing, but not big enough for gloves, keys or a phone.

Overall I was pleasantly surprised by these tights. On the first few wears I found them a bit thick, but as the cold really starts to take hold, I imagine I will be grateful for the warmth they offer. It’s a real shame that the back pocket is so small, though.

Every runner needs some gear that’s suitable for colder winter conditions, and investing in both top and tights at the same time might seem like quite an expensive thing to do. But both these items from Mizuno do a good job and they should see you through more than one winter season of running. Both have good manufacturing standards, and the top benefits from that small pocket that might come in handy.