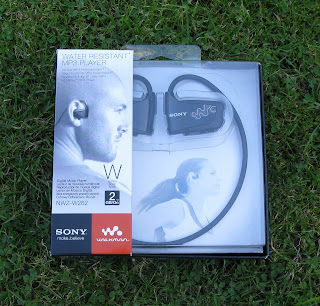 There’s a growing market for audio products aimed specifically at those with an active lifestyle, and that’s really no surprise. Who wants earbuds that won’t stay in the ears as you run or cycle or move around? Who wants cabling that annoys or chafes as it falls down your back? Who wants audio equipment that can’t take a bit of sweat, or rain, both of which are encountered regularly by outdoor types in the UK?

Sports headsets have silicon covered cables which are soft and don’t snag or chafe. They are made with various systems for holding earbuds in the ears. And there are wire free solutions too.

The theory is simple. If you build all the electronics into the headset itself, there is no need for a separate player. While wireless earphones can link with a music player easily enough, you’ve still got to carry the player as well as the earphones, make sure both are charged with enough battery power to see you through a workout, connect them before you set out, and, of course, have some way of carrying the player. Build everything into the headset and there’s just one thing to charge and one thing to carry. It makes perfect sense on paper.

The Sony Walkman NWZ-W260 comes in two capacities. I was given a 2GB version to test, and you can also get a 4GB one. Depending on the quality of your audio encoding and the length of time you want to spend running before tunes repeat themselves you might feel you want the larger capacity, but I didn’t have any problems on that front and found there was plenty of capacity for music variety on hour long runs.

Transferring tunes is a breeze. Connection to a PC is achieved via a micro-USB port that is located on the edge of the right earphone. 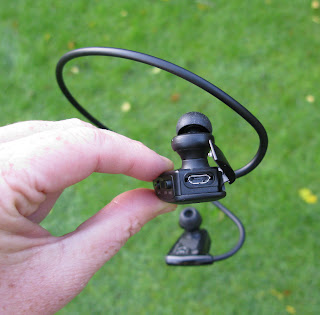 The Walkman NWZ-W260 appears like an external drive on your computer, and you can simply drag and drop music files from your hard drive. You can organise music into folders and the player will pick them up without a hitch running through them as it plays all tunes in sequence. This means you can keep your podcasts from your audio books, and group tunes any way you like. There’s another use for folders – which I will come to shortly.

As an alternative to drag and drop you can use Sony’s Content Transfer software, but I didn’t bother with it. To be honest drag and drop is so simple it’s the way to go. Installing another app is just unnecessary.
Sony has done a great job with the on-device controls with one exception. It is very annoying that the on/off switch is on the inside of the right earphone so that it sits close to your ear when you are wearing the Walkman NWZ-W260. This means you have to take the headset off to switch it on and off.

I refuse to use earphones when running on roads, only turning them on when I am off-road. On usual runs from home that means slowing down to take the headphones off, switch them on, then put them back on again when I get through the streets and into the off-road areas I mostly run in. And the process has to be done again to switch music off when I leave the off-road areas towards the end of my run.

The other option, of course, is to turn the player on when I leave the front door and then hit the pause button right away, pressing the play button when I am ready for music and the pause button when silence is needed. In practice that’s what I did most of the time and it’s a whole lot easier than fiddling with the on/off switch, but inevitably battery power is being used while the pause button is active and I did rather resent that.

Sony has done a great job with button design otherwise.  All the playback controls are on the bottom edges of the left and right earphones. On the left one there is a volume rocker and a small button that you short press to turn shuffle mode on and off, or long press to toggle through any playlists you may have set up.

On the right edge there is a pause/play button and forwards/back button. You soon get used to which controls need the left hand and which the right, and finding and hitting them while on the run is surprisingly slick thanks to their very different shaping.

Moreover, the Walkman NWZ-W260 remembers where you stopped or paused and will pick up from there again the next time you start off.

Remember I mentioned there was something more to know about files stored in folders? Well, if you long press the forward or back button the player moves through to the next or previous folder, saying, to let you know, in a soothing, American, woman’s voice ‘next folder’ or ‘previous folder’ as it does so.

The movement is purely about cycling through any folders you have set up so if you have lots you may need to be patient while the player gets to where you want it to be. But it does let you set up playlists. Certain types of tune are great for a long slow steady run, others come into their own when you are haring round doing a speed session. Use folders to organise tunes and you’ve set up some playlists.

Sony has built the ZAPPIN playback system into the Walkman NWZ-W260. This will play song clips for either 4 or 15 seconds, sweeping its way through your collection. It kicks in if you hold the pause/play button down, and then if you hold that button again the tune you are on plays in full. It works well enough, but it feels like overkill on a device that it designed purely to play tunes for sports activity and frankly I’d have preferred more sophisticated playlist controls.

There’s a charge light on the back of the right earphone next to the on/off switch which glows red when the Walkman NWZ-W260 is charging, and turns off when it is fully charged. This is a problem as obviously enough the light is also off when the Sony Walkman NWZ-W260 is not charging. So, if you think you are charging but the USB cable has come unplugged, you won’t know. A green light to indicate the battery is fully charged would have been a lot more helpful.

Power level is indicated by the light being either green, orange or red when you switch the Sony Walkman NWZ-W260 on. Go into the orange zone and it might be time to recharge. Hit the red zone and you definitely need to do so.

Sony says the battery is good for eight hours of playback and if you aren’t sure of charge levels then three minutes of charge will see you through 60 minutes of listening time.

The Walkman NWZ-W260 is water resistant and Sony says it can cope with sweat and rain. Don’t get too carried away with this idea though. It can’t be immersed in water or come into continuous contact with it and expect to survive. So it’s probably best not to wear it in the shower. And anyway, it shouldn’t come into contact with shampoo, conditioner or soap. But it should survive if you run in the rain, and your own sweat shouldn’t trouble it.

The fit is incredibly comfortable. Pop the earphones in your ear and the wire passes up over and behind each ear, held in place by a back of the neck cable. I was barely aware I had headphones on at all when running most of the time, and I wear glasses which can sometimes cause problems with these over the ear type arrangements, but I had no trouble at all here. 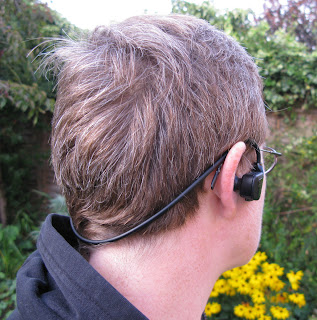 The first time I wore the Sony Walkman NWZ-W260 was for a 45 minute session and both earbuds fell out of my ears once. This was, I think, more due to sweat than head motion. I had the mid sized silicon buds fitted as these were on by default out of the box. For my next run I switched to the larger buds and there were no fallout issues after that.

I’ve said before that I don’t have the most discerning ears and that I don’t expect the best audio experience from the equipment I run with. I want enough volume to be able to hear music but not so much that it drowns out surrounding noises. I want good enough quality that I can enjoy the music and let it transport me to a place where I can’t feel the pain in my legs and the burn in my lungs as I get tired. I’m really not looking for top quality reproduction in those circumstances.

I got what I needed from the Walkman NWZ-W260. Sound had enough bass for me to enjoy, and even at very low volumes there was plenty of definition. In fact, it was good enough that I used the earphones to listen to podcasts when relaxing on more than one occasion.

There is a drawback with the design of the Sony Walkman NWZ-W260 that has nothing to do with actual use. It isn’t easy to securely stow for travel. The round the neck cable can get tangled with other things in a bag, and Sony doesn’t provide any sort of protective case or pouch.  All you get is a small plastic gizmo into which you can slot the earphones for transit. 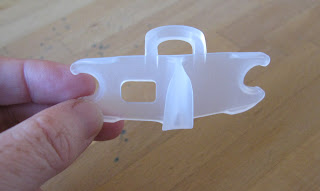 This does keep the two sections locked into position, but it won’t stop the earbuds getting fouled or the cable getting stretched in a case or bag. Sony should have provided a small drawstring pouch, but at least these are easy enough to get at a relatively low cost. 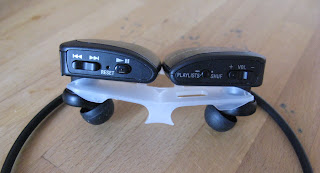 The Sony Walkman NWZ-W260 is quite simply the best running headset I have yet tried. Comfy to wear, easy to fiddle with on the move, with plenty of volume, good enough quality sound, and good battery life it ticks all the important boxes.

The faults all come outside of using the headset for sports. I’d have liked better playlist control, an On/Off switch that’s accessible on the move, and Sony really should have provided a better storage solution. Still, if the loan sample I borrowed to review has to go back, I may well end up buying my own, and you don’t get a better endorsement than that!