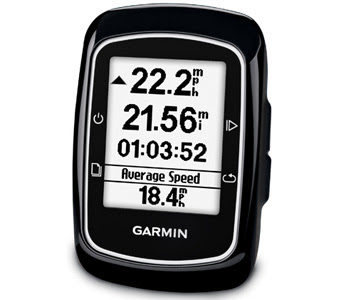 Garmin has a strong reputation when it comes to GPS enabled cycle computers, with its range topping Edge 800 being arguably the most advanced and feature packed device on the market.
But now Garmin has turned its attention to the other end of the market with the launch of the Edge 200. The Edge 200 is aimed at cyclists who are just starting to get serious and want to measure their rides in terms of speed and distance, but don’t want to get bogged down with bike sensors and heart rate monitors just yet.
Garmin is banking on the simplicity of the Edge 200 winning over leisure cyclists, with no sensors, wires, magnets or chest straps to worry about – you simply switch on the device, mount it on your bike and away you go.
The Edge 200 can store up to 130-hours of data, but it can also upload data to the Garmin Connect portal, allowing you to endlessly obsess over your performance. You can also share your rides with the Garmin Connect community and try rides suggested by other Garmin users.
The Edge 200 provides 14 hours of use from a full battery charge, while its mini-USB port allows for easy charging and data transfer. With a suggested retail price of £129, the Edge 200 looks like an affordable entry into the world of serious cycle computers.
We’ll be reviewing the Edge 200 as soon as we get our paws on a sample, so check back for the full verdict on Garmin’s latest handlebar addition.

Garmin vivofit nudges you to a fitter lifestyle