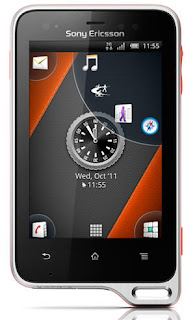 Sony Ericsson has been attracting fitness fans with its phones for a long time. Before Sony Ericsson embraced the Android operating system with its Xperia line of smartphones, its handsets ran a proprietary operating system and software. Many handsets came with GPS enabled tracking to plot distance covered, calculate times taken and map routes, and with built in software to take advantage of these features. And for those with less sweat-inducing health ambitions Sony Ericsson has also been keen on putting pedometers on its handsets too.

Now comes a new breakthrough. The Sony Ericsson Xperia active has all this plus ANT+ support built in. This means that a compatible ANT+ heart rate monitor can be used with the phone.

The Xperia active can do a lot more too. Read on to find out what.
A standard feature for mobile phones wanting to appeal to runners is GPS and it is built in here. So you can map a run and calculate time and distance data. And there’s a built in barometer and compass too. The handset runs on Android 2.3, so you can choose from a wide range of activity monitoring apps to add to what is supplied out of the box.

To further emphasise the sporting credentials, the Sony Ericsson Xperia active is dust proof and water resistant, and it comes with a scratch resistant screen that, says Sony Ericsson, supports wet finger tracking. So you should be able to get around within apps even when your fingers are a bit sweaty. This is something we’ve not seen in a touch screen before, and we are keen to try it out.

The Sony Ericsson Xperia active comes with several useful accessories in the box including an arm case, wrist strap and detachable earhooks for the portable handsfree active headset.

The Sony Ericsson Xperia active is due to appear later on this year, and of course, we’ll be writing a review.