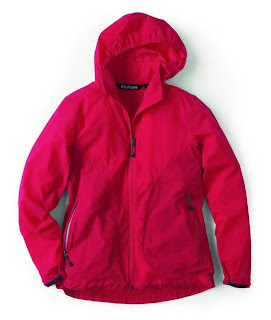 Rohan recently offered me the chance to take a look at its new 2011 catalogue and choose any items I fancied reviewing for FitTechnica. How could I turn the offer down? One item I selected was the Windshadow Jacket which comes in both women’s and men’s fits. It is not specifically marketed as running gear, but it is lightweight, breathable, windproof and tough. What I was interested in was whether it could double up as a running jacket and everyday lightweight jacket for outdoor pursuits.
First impressions augured well. The Windshadow Jacket is very, very lightweight. Not only does that mean it packs down to almost nothing, but it’s comfortable to wear – that’s very important when a jacket is an extra running layer.

The small, medium and large sizing options rang alarm bells as this can mean that the fit is less accurate than when matched to standard clothing sizes, but I was sent the medium sized jacket and it fitted my size 12 frame nicely. Some people may feel it is a little long – it is longer than my usual running jacket, and the fit is not as snug as my usual running jacket either. But depending on your preference you might find the roomy fit preferable. And it is not too long in the arm, either.

Velcro strips at the end of each arm allow you to tighten the jacket so the fit is snug, and there are two drawstrings at the bottom – one on the left and one on the right – so you can pull the jacket in tight around the hips. 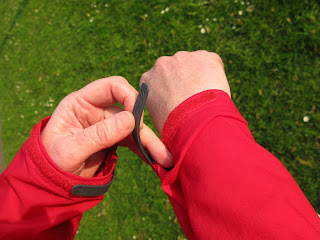 I was sent a crimson version, which is a bright colour for running in. Women can also opt for lapis blue, while men can select either a slightly darker zenith blue or black.

A hood can be tucked away in the collar when not in use. I remember pining for this feature when trying out the Nike Vapor Lite Women’s Running Jacket and I was very happy to see it here because I’d intend to use this jacket as much for general outdoor activity as for running. However, I was disappointed that the hood doesn’t benefit from a drawstring. The elasticated bindings didn’t really do enough to get the snug fit round the head that I really look for in a jacket of this type. 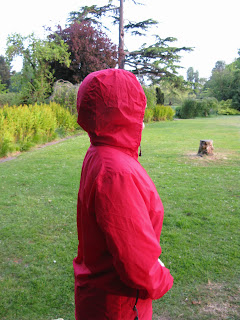 Also, because this isn’t a jacket designed specifically for running there’s no reflective material built into it. That won’t matter if you are wearing it during the daytime or light summer evenings, but in dark conditions I always advocate wearing clothing with plenty of reflective elements. When you are travelling at speed along a dark road, you really need traffic to see you approaching road junctions.

The Rohan Women’s Windshadow Jacket accompanied me on a weekend break to Belfast where I planned to do some running and some sightseeing. It worked perfectly as a general everyday jacket in the weather conditions encountered, but unfortunately the weather was too warm for me to try it out running.

Subsequent to the trip, the unseasonably warm British weather and rain free South East of England mean I have not been able to try the Rohan Women’s Windshadow Jacket for running in the rain. I plan to test it when there is rain and report back. The jacket is only classed as water repellent, so I am not expecting to stay dry in a thunderstorm, but I do expect it to keep me dry in a spring shower.

All that said, I have worn the jacket for a couple of gentle runs in the evening, and have found it to be roomy and comfortable. There is a small amount of stretch in the fabric which helps in this respect. Running with a small rucksack containing no more than swimming gear was a comfortable experience, the fabric gratifyingly refusing to bunch up under the rucksack.

There are two generously sized outer pockets while an inner pocket on the left side doubles up as secure stowage for really important stuff and as a pouch into which the jacket packs down. This is great for travelling – it took up almost no rucksack space on my Belfast trip. 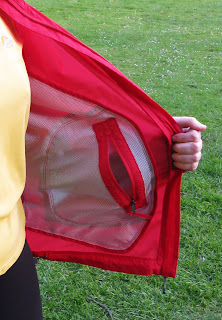 The men’s version also has a zipped chest pocket. I felt hard done by that this is not also present in the women’s  version. NB – the Rohan web site says the women’s jacket has the chest pocket, but it most certainly was not present on my sample.

Based on testing so far, the Rohan Women’s Windshadow Jacket has proved an excellent travel companion. Its high degree of portability is great when you want to travel light, and it looks good enough to get you through general outdoor and semi-smart occasions, so if a weekend break doesn’t involve anything too formal, it could be the only jacket you need.

On countryside walks it proved to be an excellent windbreak, and because it isn’t too bulky and sweat-inducing it also came into play when I needed something to help keep the hot sun off my arms.

Is it a good running partner? Well, as I said at the outset this jacket isn’t designed for that task. There are no reflective strips, no drawstring round the hood, and no specialised running features, and the jacket is not waterproof, just showerproof.

I think that if you are looking primarily for an outdoor jacket and only very rarely venture out running in the rain, and only then in showers rather than raging thunderstorms, the Rohan Women’s Windshadow Jacket could double up quite happily. If you are a serious runner and go out whatever the conditions, then I think a specialised running jacket is better suited to your needs.