My Tracks for Android Review 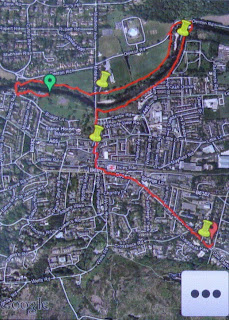 If you own a smartphone with GPS built in you have access to all manner of route tracking applications. Many of these are designed specifically for sports and fitness. If your smartphone runs Android you’ve got the added advantage of Google Maps, onto which it is easy for third party applications to mark any route.

My Tracks is one application that you can run on Android based smartphones. It has been produced by Google, uses Google Maps, and can record a variety of different types of data about any activity. Its display is good enough for you to use while actually training to see how you are doing, and you can upload reports to Google Docs and Google Maps for some quite detailed statistical analysis.

You can download My Tracks direct to your handset from the Android Market, and like many applications of its type, My Tracks is free.

My Tracks is easily downloaded direct to your Android handset from the Market on the smartphone itself. It installs quickly, and you can simply put a link onto your phone’s home screen in the usual way – find My Tracks in the apps list, press and hold, and the icon pops onto a home screen. 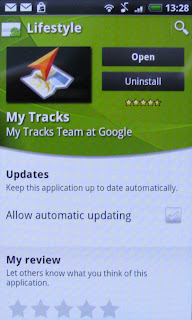 There is nothing at all that you have to do by way of initial setup. The information the application gathers and stores is generic and not personalised.  My Tracks makes no attempt to record calories burned, a calculation that is made on the basis of generic speed and distance data and specific age and sex information. So you can, quite literally, be using the application within a couple of minutes of downloading it.

While you don’t have to do any initial configuration a quick browse through the settings area will be useful if you want to personalise how My Tracks records and displays data. You’ve got the option of metric or imperial units of measurement, and a whole load of tweaks relating to the recording of time and distance data. 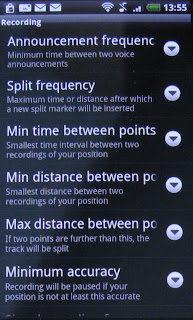 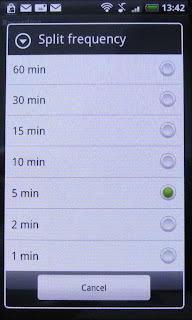 You can make a range of settings in which you trade off recording accuracy and battery consumption. For example you can set the frequency at which location points are recorded, with one setting specifically for battery saving.

GPS is a notorious drainer of battery power, and I was initially concerned that My Tracks might not prove practical for this reason. But actually it was pretty frugal on battery usage. I found about an hour’s run drained the battery of my HTC Desire by about 15 percent, and did not feel the need to tweak any settings beyond the ‘recommended’ marker to conserve battery power.

My Tracks can make voice announcements, and you can set a minimum time between these announcements, so that you don’t get too bothered by a lot of backchat from your smartphone. 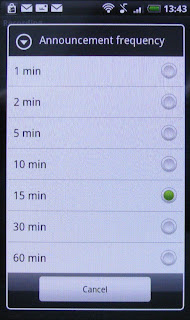 The announcements give you plenty of detail – distance travelled, time taken and average speed. You don’t get any choice of voice which is a computer generated female English one, and you can’t repeat an announcement so you need to pay attention. Volume is pretty loud and I found it quite startling at times, probably partly because I had the earphones in and no music on.

When you are ready to start an activity session you make sure the GPS is switched on then wait for a fix. Switching GPS on is made easy thanks to a large tappable notification which appears on the main screen. Just hit it and you are taken off to the GPS settings area of your smartphone.

When you’ve got a fix select Menu the Record Track and the recoding starts. When you are done, select Menu again and this time choose Stop Recording. 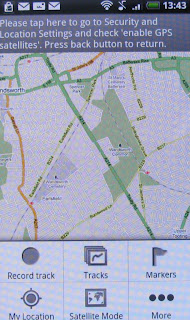 While recording a route I put my smartphone into the back pocket of my running bottoms, but you can easily strap it to your arm or use a bike mount and in that latter configuration you can watch as the stats rack up on screen. 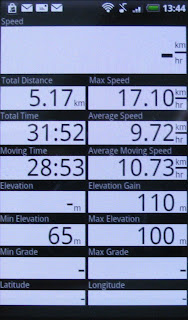 You can’t change the configuration of the stats screen, but it delivers a lot of data. Along with speed and distance, total time and average speed there is data for elevation and gradient. And the software tracks the total activity time and the time you’ve actually spent moving. So you can delete time stopped at traffic lights or whatever from the total time taken to get an accurate measure of real activity time. You also get a speed/elevation graph.

As well as calculating statistics for each run, My Tracks can aggregate total statistics. This has potential to be really useful, but it needs some work. It would be great to be able to set it to total up distance run this month and then let you reset to zero at the start of a new month, for example. As it is, offering just simple running totals, it isn’t really all that useful from a training point of view.

Individual sessions are called tracks and they are automatically saved. If you don’t want to name them they are simply saved by date. Once a track has been saved you can edit its title by replacing the date based name with one you prefer, and also add an activity type and some descriptive text as a sort of log or training diary. 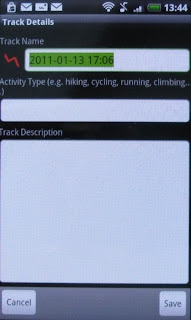 Because Tracks are overlayed onto Google Maps you can view them in both street view and satellite mode. 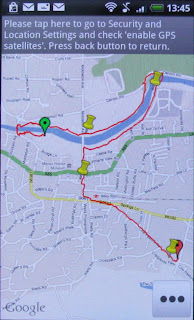 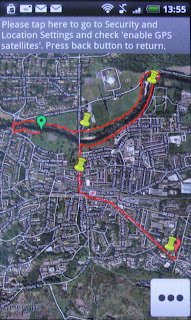 Any good sports tracker application lets you get data off the device and into an external app for saving and analysis. Where My Tracks is concerned that means sending data to both Google Maps and Google Docs as well as exporting to a number of file formats for use wherever you like. 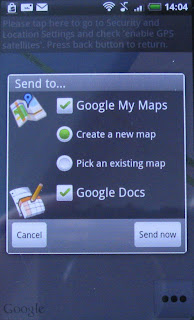 Uploading to Google Maps puts Tracks into the My Maps section of Google Maps so that you can view any saved routes whenever you log in. You get some basic data sent along with the map – distance, time taken, average speed and so on, as generated by the My Tracks software.

You can’t do a great deal with that data though. To analyse it you need to send it to Google Docs where it appears automatically in a spreadsheet. The really clever thing about this is that whenever you complete a new activity and send the data to Google Docs, it is appended to a My Tracks spreadsheet so that you can perform any calculations you want on the data. And there is a link to the Google Maps map of each session too.

This makes keeping an eye on progress and maintaining a training diary really simple. The main problem is if you do several different types of activity. For simplicity’s sake new data is uploaded  into a single spreadsheet. If you want to separate your cycling from your running, for example, you’ll have to do a cut and paste into separate spreadsheets in Google Docs. Similarly if you want to use My Tracks for recording hiking as well as running training, It isn’t a big deal to do this, though, and if you are into multiple training regimes you might well want something a bit more specialised anyway, such as a cycling computer that can handle cadence measurements.

If you don’t like Google Docs or Google Maps you can export to various file formats. 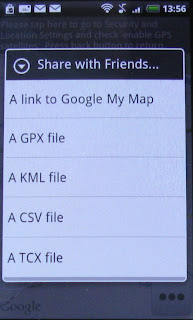 GPX is a standard GPS data logging file format, KML files can be put into Google Earth, CSV files can be imported into any spreadsheet and TCX files are compatible with Garmin’s Training Centre software.

My main problem with My Tracks came with getting a GPS fix at the start of a session.  My smartphone is slow to get a GPS fix in general and this meant that on some test runs I couldn’t be bothered to wait for it to kick in. I’d sometimes get around 1k into a run before the GPS got a lock. On those runs, of course, the stats were irrelevant. If you want to use My Tracks seriously you’ll need to be patient at the start of a run to get the best from the app.

Of course I’d like more. Auto start/stop would be nice, as would the ability to choose between different My Tracks Google spreadsheets to upload to, and the ability to tweak the aggregated statistics on a smartphone so I can get running totals for a month, a week, or whatever timeframe I want.

But overall, as a free application, My Tracks is superb. If you are just starting out with fitness activity and aren’t sure if a specialist watch or GPS tracker is for you, it could be a great way to dip your toe into the fitness technology waters.