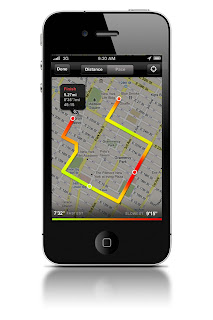 In early September Nike announced its Nike+ GPS app for iPhone and iPod touch. We reported on it and you can read the report here. In doing this Nike was building on the successes of the Nike+ kit for runners and also jumping on the increasingly popular AppStore bandwagon.

The Nike+ GPS app aims to provide anyone with a compatible Apple produce the opportunity to measure speed, distance and pace for an outlay of just £1.19. You don’t need any additional Nike+ kit. With voice encouragement from Lance Armstrong, Paula Radcliffe and American comedian Tracy Morgan thrown into the mix, it certainly carries some weight in the talent department.

The whole thing sounds like an absolute bargain. So, of course, I had to give it a try.

Downloading the Nike+ GPS app for the iPhone is no different from downloading any other app. I found it in the app store and downloaded it to my iPhone in a matter of seconds, paying my £1.19 in the process.

However before downloading I had to update my iPhone 3GS to OS4 which is the latest version of the Apple mobile operating system. This isn’t a big issue, but you’ll need to factor in a little time to get the job done. In fact, the Nike+ app is compatible with iPhone 3GS, iPhone 4, and iPod touch 2nd, 3rd and 4th generation providing they are running iOS 4.0. One of the key features of the Nike+ app is GPS tracking of your runs, and to take advantage of this you’ll need a device with a GPS receiver in it – which means an iPhone rather than an iPod touch.

With the app installed you still have a bit of setting up to do. As is usual with all the more sophisticated kit for runners you need to give the app some vital statistics in the form of your height weight and sex. These are the only really essential settings, but to get the most out of the software you’ll do well to make some additional settings, for example asking the software to measure distances in either miles or kilometers. 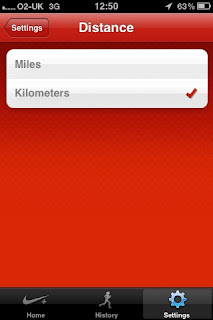 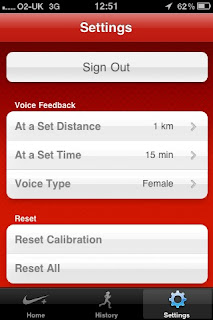 However, the feedback amounts to just information about what has been completed. You aren’t told ‘three miles to go’, or ‘ten minutes to go’ during a run. And there are no words of encouragement from those celebrities at these points. You get either a male or female voice, with an American accent.

Another choice you can make is to set a preferred screen orientation choosing between landscape and portrait. To be honest this seems a bit of a strange one. When I tested the Nike+ software I had my iPhone in the back pocket of my running shorts, and you may well be likely to have it here or on an armband. The chances of you wanting to take a quick look at the screen seem minimal. In the gym you could have your iPhone or iPod touch in a more visible location, I guess.

A more useful setting is the ability to choose  a ‘powersong’ – the song that gests you past the difficult sections of a run, or perhaps the tune that you know will spur you on to a final burst of energy in the very last minutes of a run.

You can use the Nike+ GPS App as a standalone application, but if you do that you won’t be getting the most out of it. Register at Nikeplus.com and you can upload your runs to the web site from the phone. Nikeplus.com offers run logging, mapping and coaching for a range of goals. You can register direct from the iPhone or iPod touch and once you’ve got that done you can configure automatic sync so that every time you’ve finished a run it uploads to Nikeplus.com automatically.

The Nike+ GPS App software proved to be very unobtrusive to use while running. You may find that a good thing or you may not. Because it is unlikely you’ll be in a position to see the screen during runs if you are not in the gym, you rely on those aural messages to tell you how much you have completed which I found fine. But if you use a wrist worn computer you can glance at it to see things like distance covered and current speed if these things are supported. If you are aiming for a specific time and want to understand how to pace yourself, this information can be very useful.

One feature I did really like was Challenge Me. You can take on the last run completed by trying to go faster, further, or run for longer. The software suggests goals in each case but you can fiddle with these to customise them to your own liking. Alternatively you can try to ‘beat a record’ beating your farthest run or the one that took you the longest, or doing a faster single kilometre or mile than you’ve done before. These options are a great way to push yourself and they are usable whatever your current ability level. 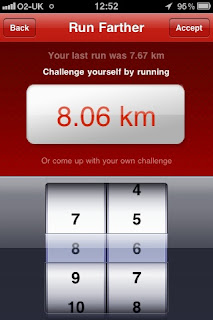 There is a very neat feature in that the main screen of the Nike+ GPS App shows running totals – distance covered is writ large, and in a much smaller font there is the number of runs you’ve done, your average pace, total duration spent running and the total number of calories you’ve burned. If you like the encouragement of seeing the numbers grow then this will be a very welcome feature. It is amazing how quickly the distances mount up – particularly if you choose to measure them in kilometers rather than miles! 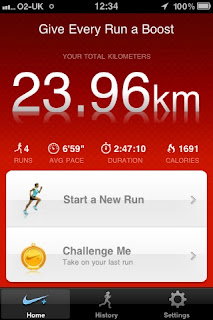 Either Lance Armstrong or Paula Radcliffe pop up at the end of each run giving you a congratulatory message of some sort. I never encountered the comedian Tracy Morgan – maybe he only pipes up if you blow up and put in a dreadful performance!

When you’ve finished a run you can overlay the route taken onto a map and show both distance and pace. In the latter case pace is colour coded from green for fastest to red for slowest so that you can see where you are really flying and where you are slower – and how consistent you are at pacing. 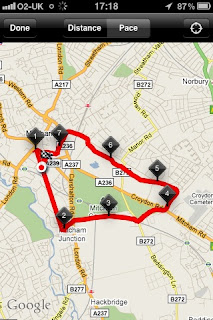 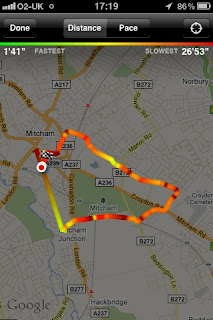 You also get a range of ways to quickly evaluate a run using symbols for how you felt, the weather and terrain. You can also write a textual note. All this information can be uploaded to nikeplus.com. At nikeplus.com you can set a range of different goals to help you achieve more, scheduling runs to help you meet these goals. 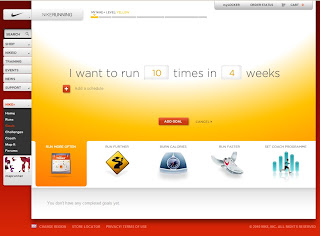 On the Nikeplus.com web site you can view runs in detail, analysing pace and distance and even plotting your runs on a map and having them rerun through with distance markers, times and even elevation. 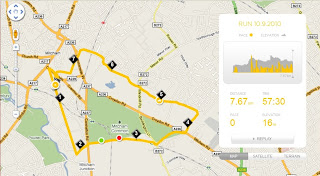 All this is absolutely super.

Also the Nike+ GPS App is not clever enough to be able to stop its recording when you are forced to stop. This means if your run includes a fair few waits at traffic lights, as many of mine do, your recorded time won’t actually reflect the time you spent running – it’ll include the waiting time too.

In turn that means the calculation of your average time per km or mile will be longer than it should. Even over a shortish run like a 5k this can make three or more minutes difference on the distance and time per km recorded. If you are working towards a defined goal for a specific distance, then, you are best off trying to do your runs at that distance somewhere where traffic lights can’t be found. Of course if you decide that place is a gym the Nike+ GPS App won’t have access to a GPS signal to record your distance – even if it did you’d effectively be standing still when on a treadmill.

GPS is a notorious consumer of power in smartphones. During my test runs I found that I used about 10 percent of battery power for each 5k of running. If you plan long runs it would be a good idea to make sure the battery is well charged before you set out.

There is no doubting that the Nike+ GPS App is a neatly designed application on the iPhone or that Nikeplus.com is similarly good looking and slick. On the phone the app is very easy to get around, and I do like the use of symbols to evaluate a run. These are quick and easy to use, though I do think the terrain type set needs refinement. Most of my runs are a mix of road and parkland, and I can only choose either road, trail, treadmill or track, which isn’t really appropriate for me.

The on device mapping tool is great too. It is particularly useful to be able to see where your pace picks up and where it drops off – it gives plenty of indication of the stretches of a run or the time segments in which you need to try harder.