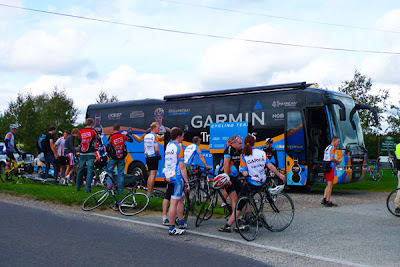 If only every Monday was like yesterday. I woke up, packed my bike and all my riding kit in my car and drove down to the New Forest, where I met up with the guys and gals from Garmin UK and around 200 other keen cyclists. You see yesterday was the annual Garmin ride out, where the company invites some of its customers (and a few tired old journos), to head out on their bikes for a bit of two wheeled socialising. To make things even more interesting, some of the guys from Team Garmin came along to remind us that we’re mere mortals compared to the gods of professional cycling.

The 19.4 mile route that Garmin pulled together had just about everything. There were a couple of good climbs, some great downhill sections, and a fabulous cruise across the moor. Even the homicidal wildlife couldn’t put a damper on proceedings, although one particularly evil donkey did try its best to kill me at one point. The weather too, was glorious and I think it’s pretty safe to say that a good time was had by all.

Organisation was also first rate, with clear waypoints and marshals at every turn, support vehicles and even a mobile paramedic unit. Gladly I don’t think that the latter service was needed by anyone, but it’s better to be safe than sorry, as the saying goes.

The only downside to the day was that I couldn’t convince Garmin to let me walk away with one of the new Edge 800 cycle computers, but I was promised that I’ll be getting my paws on one in a couple of weeks. So, check back for the FitTechnica verdict on Garmin’s new baby.

Oh, and in case you were wondering, I finished the course in one hour, four minutes, which was a long way from the fastest, but also nowhere near the slowest. I think I’ll put in a bit more training before next year’s event though.

The joys of the unexpected

Fitbit One – how Fitbit customer support earned five out of five