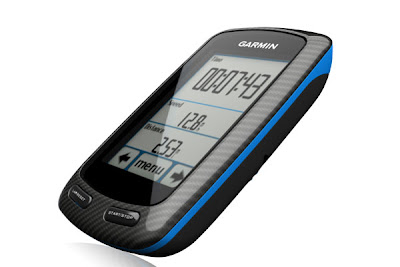 Garmin has announced what appears to be the most feature rich cycle computer ever to hit the market. The new Garmin Edge 800 will combine all the performance data recording features of the Edge 500, with the mapping functionality of the Edge 705.

It looks like the Edge 800 is following in the design footsteps of the Edge 500, in that it looks like a cycle computer rather than a traditional GPS unit. The picture on this page is the only image that Garmin has released so far, but the large, colour screen and carbon fibre surround will certainly complement even the most expensive stem or handlebars.

As with the Edge 500, the Edge 800 will provide speed and distance measured via GPS, altitude, temperature, auto lapping functions etc. Of course the unit will also be compatible with ANT+ sensors, so if you already have a Garmin Speed/Cadence sensor on your bike (as I do), the Edge 800 will be able to connect seamlessly to it. The same will go for your ANT+ heart rate monitor.

It would therefore make sense for Garmin to sell a version of the Edge 800 with no sensors bundled. That way, anyone wanting to upgrade from an Edge 500, won’t need to pay for sensors that they already have. There’s no word on the Edge 800 bundle options or pricing yet, but I’ll update this article as soon as I find out.

Then there’s the mapping functionality. The Edge 800 will be compatible with Garmin’s GB Discover microSD cards, which means that you can load the device up with Ordinance Survey based map data, ensuring that you always know where you are. So, if you’re lost off road you can get a fix on your location, then set waypoints that get you back home.

The maps also contain road data though, so you can configure the Edge 800 to give you turn by turn instructions, ensuring that you get to your destination quickly and safely. There’s even a full points of interest database in there, so you can find a place to eat, a bike shop or just the nearest pub while you’re out on exploring.

You can also use Garmin’s free BaseCamp software to plan your routes and then upload them to the Edge 800, so you don’t have to waste time plotting a course on the device itself.

That said, it shouldn’t be hard to do anything on the Edge 800 directly, because it’s likely that this device will sport class leading usability. You see that 2.6in colour screen also has a touch-based interface. How well implemented this touch-screen interface is remains to be seen of course, but it certainly sounds like a big step forward for cycle computers.

I’ve already requested a Edge 800 sample from Garmin, so check back soon for the full review.

Apple iPhone 5S: A phone with fitness in mind

Adidas miCoach gets an update