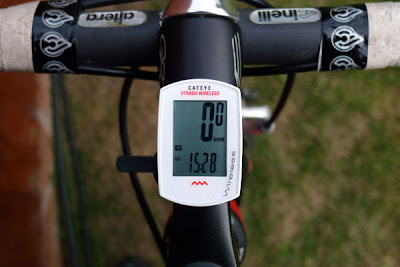 Recently I reviewed the Polar CS500 and Garmin Edge 500 cycle computers, both of which are high end, fully featured, serious pieces of kit, with price tags to match. However, if you’re just getting into cycling, or more of a leisure rider, you might not need that level of data. That’s where the subject of today’s review comes in – the CatEye Strada Wireless.
CatEye has been making cycle computers for a very long time. In fact the very first cycle computer I ever bought was a CatEye – it was a CatEye Mitty, which I mounted on my Muddy Fox Pathfinder, and a great product it was too. The Strada Wireless that I have in front of me now represents a natural progression from my old Mity, but is it the perfect partner for a cyclist that’s looking for a bit more information about their ride?
What’s in the box?
The Strada Wireless packaging is as compact as the device itself. Inside you’ll find the Strada Wireless that measures only 46.5x 31x16mm (HxWxD) and weighs a svelte 22g. The version that CatEye sent me for review was finished in white, but you can also get a black version. There are even special editions in the Tour de France jersey colours. 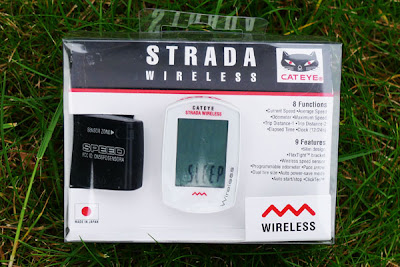 The design of the Strada Wireless is quite sleek, with no visible buttons or controls. The LCD screen dominates the unit, making it easily readable despite the relatively small physical dimensions of the device itself. 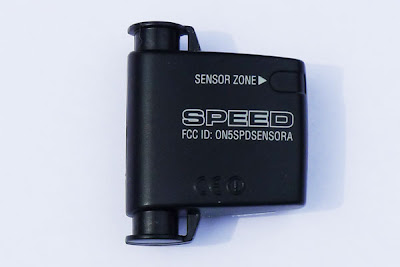 The other main ingredient of the kit is the speed sensor. This is a fairly chunky unit that’s about as big as the Strada Wireless itself. However, unlike the Polar speed sensor, this one has a removable battery, so it doesn’t need to be replaced when it runs out of juice. The battery should last for around 10,000km according to CatEye 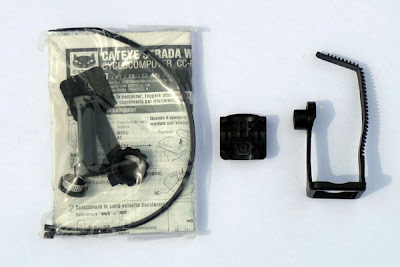 The other bits and pieces include a mount and cable ties for the speed sensor, along with its corresponding magnet. Finally you’ve got the mount for the Strada Wireless itself, which is quite ingenious in its design.
Setup and configuration
As mentioned above, there are no buttons on the fascia or sides of the Strada Wireless, instead the controls are mounted on the rear of the device. Here you’ll find a Mode button and a Menu button. The latter is only used while setting the device up or changing the settings, while the former takes care of general functionality. 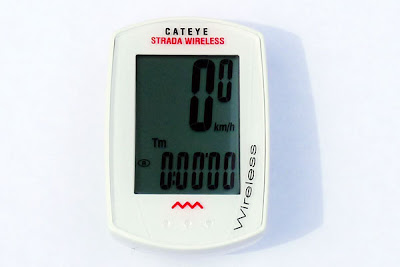 The Strada Wireless doesn’t require a huge amount of setting up, but there are a few bases to cover. First up you’ll want to set the time of day, which is displayed on the default info screen. Next you’ll need to choose between imperial or metric measurements – there are no altitude or temperature readings in the Strada Wireless, so this pertains solely to speed and distance measurements.
The last thing that you need to configure is the wheel diameter. There’s a table in the brief instruction manual that you can use to identify your wheel size, but ideally you’ll want to measure this manually. The Strada Wireless can be used with two different bikes with different wheel sizes, so if you have a road bike and a mountain bike, you can enter the wheel size for both and then switch between the A and B settings, depending on which bike you choose to ride. 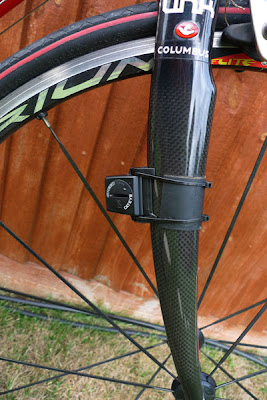 The next job is mounting the speed sensor and magnet. The sensor mounts to the front fork, facing backwards with the battery compartment facing outwards. One of the great things about CatEye computers is that they tend to come with large sensor magnets. This means that you don’t have to line the sensor and magnet up as accurately as you do on some other devices. It’s still best to get the magnet to pass as close to the sensor as possible though.
Finally you need to attach the bike mount for the Strada Wireless itself. CatEye has clearly put some thought into the design of the bike mount, making it easy to attach to either your stem or handlebars. You just need to make sure that you orient the mount correctly, or you could end up looking at a cycle computer that’s upside down. The Strada Wireless needs to slide towards you into the bike mount. 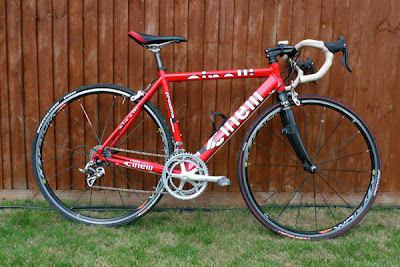 You get a rubber pad that sticks to the back of the mount – this will keep it in place and quiet once you tighten up the securing strap. A nice touch is that the securing strap is tightened via a twist lock collar, so there’s no tugging at cable ties while trying to keep the mount in the right place.
Design and usablity
The Strada Wireless may be small, but it really is perfectly formed. Even though I would have opted for the black version, given the choice, it still looks great in white. Its small size also means that it’s far less likely to be a cockpit intrusion, even if mounted on the handlebars. That said, mounting on the stem would still be my preference. 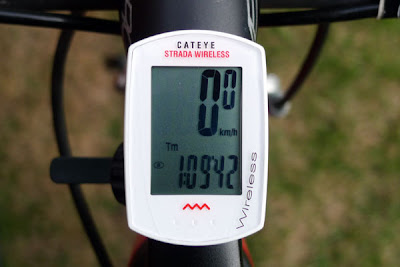 When it comes to usability, the Strada Wireless is right up there with the Polar CS500, since it uses a very similar control method. Because the Mode button that controls the device is located at the rear, the bike mount has been designed to operate that button whenever the user presses the bottom of the Strada’s fascia. So you don’t have to try to find a front or side mounted button while you’re riding, you just press the device itself.
The Strada Wireless works on an auto-start-stop model, so there’s no button to start the session or to stop it when you’re done. As soon as the front wheel starts turning, the Strada Wireless will start its timer and begin measuring speed and distance. Holding the Mode button for a few seconds will reset the current trip and let you start with a clean slate again, although the odometer obviously doesn’t reset itself. 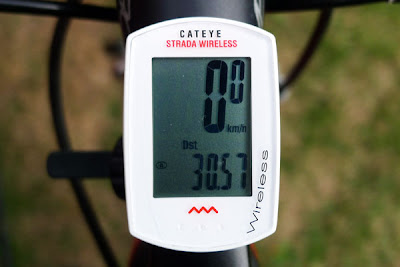 You also get two distance readings. Distance 1 will reset to zero when you decide to start a new session. Distance 2 will only reset when you are actually on the Distance 2 screen and hold the Mode button – it will also not reset the overall session. This is useful if you want to measure a section of a ride, while continuing to measure the whole ride. 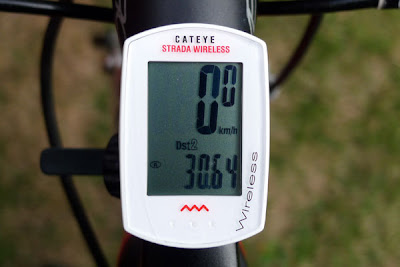 In use you get primary and secondary data windows. The primary window shows your current speed and is large enough to read at a glance. The secondary window can display different data, depending on what screen you have active at the time cycling through Time of Day, Ride Time, Distance 1, Distance 2, Average Speed, Maximum Speed and Odometer. When the Strada Wireless has been idle for a while it will default to displaying the time of day. 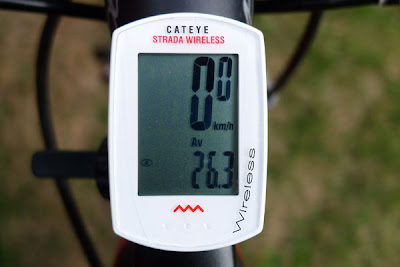 There’s no way to transfer your data from the Strada Wireless, so if you want to log all your rides, you’ll have to manually enter the data into a spreadsheet after each ride.
Conclusion
The CatEye Strada Wireless may have a basic feature set, but it’s not what I’d call a basic cycle computer. CatEye has put a lot of effort into making the Strada Wireless simple to use, even when on the move, and ease of use is arguably even more important on a device that appeals to beginners. 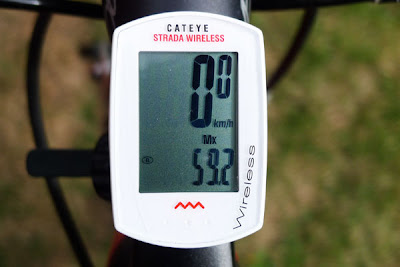 The design of the unit has a degree of minimalist style that’s accentuated by the lack of physical buttons on show. And it’s that lack of buttons that makes the Strada Wireless a joy to use, in exactly the same manner as Polar’s excellent CS500. When you’re riding at 35mph you don’t want to be searching for buttons on your cycle computer when you’re looking to check your progress.
If you’re a casual cyclist that wants to measure how far you’re riding and how long it’s taking you, the Strada Wireless will fulfil that brief in style. In fact, even if you’re a more serious cyclist, the Strada Wireless could be worth a look, especially if you’ve already invested in a heart rate monitor that doesn’t have bike sensor options. 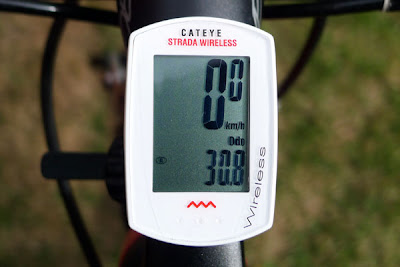 The SRP of £49.99 may seem a little steep when you consider the limited feature set, but the CatEye Strada Wireless can be had for around £34.99 at many online retailers, making it a far more attractive proposition. The bottom line is that this is a great little bike computer with outstanding design and usability. It’s no wonder that the Strada has already gained relative cult status within the cycling community.
Pros
Cons
Manufacturer: CatEye
SRP: £49.99